President Akufo-Addo yesterday commissioned Phase II of the Accra Compost and Recycling Plant (ACARP), executed by the Jospong Group and Partners at the cost of about €20m.

Speaking at the commissioning, the President stated that as a result of urbanization, particularly in the country’s major cities, the capacity of the current 600-tonne plant cannot cope with the increased municipal solid waste generated daily within the city of Accra.

“It is for this reason that Jospong Group and Partners, with support from Government, embarked on expanding the existing facility from six hundred (600) tonnes per day to two thousand (2,000) tonnes per day,” the President said.

Phase II of the plant is well-equipped with modern teaching and learning facilities, as well as ultra-modern laboratories for training and research into modern effective processing and recycling technologies. 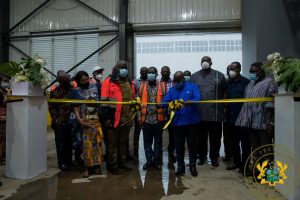 With the completion of the facility, the President said it will bring immense benefits to the country through the efficient management of solid waste in a more environmentally friendly and sustainable manner.

The President said the establishment of an efficient integrated waste management facility requires huge financial outlay, and, with the competing needs of other sectors of the economy on the government budget, it is becoming increasingly difficult for government alone to shoulder this responsibility.

He, therefore, reiterated his administration’s commitment to partner the private sector in the management of sanitation in the country.

“It is for this reason that, on the assumption of office, my Government made a commitment to address this menace to transform Ghana to be one of the cleanest countries in Africa. In this regard, the Government has taken the requisite steps to create the enabling environment and framework for the private sector to partner with government in finding lasting solutions to this herculean challenge,” he said. 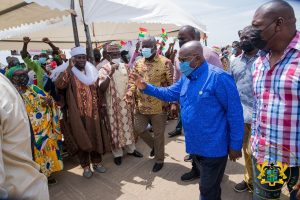 He said “it is important also to note that, as a result of the huge capital requirement to establish infrastructure for the management of solid waste, most private sector players have been reluctant to enter into this space. I am glad and fortunate that Jospong Group and Partners have entered this space to partner Government to assist us in addressing the sanitation situation.”

Other benefits to be derived from the facility, the President said, include the production of organic compost for horticultural and agronomical purposes to boost agricultural production and the Planting for Foods and Jobs Programme.

Additionally, the plant, he indicated, would create job opportunities for some three hundred (300) persons in various capacities on a full and part-time basis, which is one of the key priorities of the government, and will translate into an improved standard of living for these workers and their families.

As co-Chair of the Group of Eminent Advocates for the 2030 United Nations Sustainable Development Goals, President Akufo-Addo noted that “it is heartwarming to note that the execution of this project will help realize some of the targets under SDG 6, which demands that we provide clean water and sanitation for all.”

In furtherance of this, the President said that his government is collaborating with Jospong Group of Companies and Partners to implement the Integrated Recycling and Compost Plants in all the sixteen (16) regions of the country, to help address the prevailing sanitation challenges.

President Akufo-Addo revealed also that government, in the future, is considering collaborating further with the private sector to provide sanitation infrastructure for the production of refuse-derived fuel in commercial quantities; medical waste processing; waste to energy facility; industrial waste processing; and e-waste processing.

The second phase of the ACARP, which adds an 800-tonne line to the existing 600-tonne facility, will provide Metropolitan, Municipal, and District Assemblies (MMDAs) within Greater Accra Metropolitan Area (GAMA), a viable and cost-effective alternative to dumpsites.

Prez Akufo-Addo Is One Of The Wisest In The World; A Great Erudite” – Serbian President

It is also increasing the plant’s capacity to bridge the existing gap of untreated solid waste within the Accra region.

The Executive Chairman of Jospong Group of Companies (JGC), Dr. Joseph Siaw Agyepong, who took the President round, disclosed that the project was made possible with the support of their partners, Lubo Recycling Systems of The Netherlands.

“Additional eight (8) equipment are being manufactured by Lubo Bollegraaf Group for the Integrated Recycling and Composting Plants (IRECOP) in Ho, Takoradi, Tamale, and Techiman among others,” he revealed.

He said the plant which started with a workforce of 150, will be adding an additional 200, and used the opportunity to express appreciation to the Ministers of Sanitation and Water Resources, Mrs. Cecilia Abena Dapaah, Greater Accra Region, Henry Quartey, and Local Government and Rural Development Mr. Dan Botwe for their effort in ensuring the project is completed.

I Have Discovered Cure For Coronavirus – Angel Obinim

Lady slumped and died while dancing in church [Video]

Sachet water to sell at 40pesewas