Illegal Miners:Thirteen (13) illegal miners have been arrested by the taskforce of Ghana National Association of Small Scale Miners (GNASSM).

The suspects including some West African Nationals were arrested at Accra Village, Mampong, Nkatieso, Mokyere, and other places operating on the Birim river.

The GNASSM Taskforce commander Don Chebe said the operations took place on Thursday and Friday. He said close to a hundred(100) chanfai and water pumping machines were burnt while others were retrieved.

The Vice President and Secretary of GNASSM respectively Sampson Kofi Wiredu and Godwin Armah respectively said the operation is to augment effort by government to clamp down on illegal miners whose activities continue to create a mess in the mining industry.

The Communication Director of GASSM Razak Alhasan said, illegal miners continue to threaten the water quality of Birim river in the Eastern Region, therefore, every effort will be made by the Association to protect it. 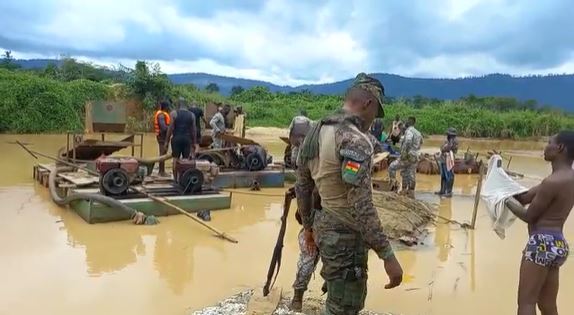 Razak Alhassan stated that the association together with the security has deployed a  strategy to fish out financiers of these illegal miners.

Meanwhile, a total of about 27 pieces of illegal mining equipment were burnt in a special joint Military and Police Operation led by the Deputy Minister for Lands and Natural Resources George Mireku Duker in Eastern and Ashanti Regions.

The team also burnt a number of tents being used by the illegal miners as shelter.

Six suspects including some West African Nationals were arrested during the operation conducted on September 30, 2021.